A Message From Above

One of the things my mom loved most was her Southern Living cookbooks. Each year, they publish the Annual Recipes volume, and my mom purchased them, year after year, since the inception in 1979.

She of course purchased the 2012 volume, and although we haven’t actually talked about it, I suspect at least one of us in the family will continue this tradition.

Over the years, Mama marked quite a few recipes. Each holiday season, she labored over the menu for weeks—paging through the Southern Living cookbooks, marking recipes, taking notes on a yellow legal pad, and finally emerging with the complete menu. I remember this tradition around Thanksgiving and Christmas time each year, for longer than I’ve been alive.

So, glancing at that full shelf of cookbooks in my parents’ house instantly causes a flashback of memories.

Yet another reason why it’s difficult to go to my parents’ house. She’s everywhere there—from the books to the kitchen, from the bedroom to the very lamps carefully chosen for each room.

In some ways, it feels like forever since she passed away.

Nearly four months have passed, now. That seems like a long time, doesn’t it? Maybe.

I’m not sure why, but the last couple of weeks have been the toughest grief weeks I’ve had in months. I’ve felt needy, whiny, desperate, and forlorn. I've felt exhausted and weary, and because of that, I've had very (very) little energy. I’ve cried, I’ve been less than mature, and basically, I’ve pined for my mama.

And yet, I’ve felt her close this week, too. I wasn’t sure why.

I checked the mail yesterday morning. I was running late, and I’d forgotten my glasses. I figured that since I’d forgotten to check the mail the night before, I’d check it on my way back upstairs.

I didn’t expect to receive anything so transformative.

I got a little note from Oxmoor House.

I instantly recognized that publisher—they publish the Southern Living Annual Recipes cookbooks. I stared at the note for a moment, and I got a funny feeling in the pit of my stomach. A lump suddenly sprang into my throat.

I somehow knew that reading the contents of this note would change my day. 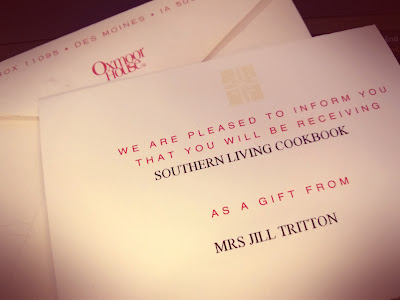 I opened the note and slowly read that I would soon be receiving a Southern Living cookbook.

I must have read my mom’s name over and over again. I stared at her name printed on that note for what may have amounted to a full minute—as if staring at her name harder would bring her back.

I threw the note down and said several confused curses under my breath, and I went on my way—my face already hot with tears streaming down.

I cried all the way to my destination, and when I got to the parking lot, I sat there with tears running down my face for a few minutes longer.

I didn’t know what to think, feel, or do. I was so confused that I wanted to call my dad right away—but, I didn’t, because it was only about 8:30 in the morning, and he might not have been up yet.

So I sat in wonder… at how such a thing could happen. How could she know? How did this note land in my mail box at precisely the time I needed it?

She didn’t always understand the way I needed to hear that she loved me, but she expressed it in so many other ways… ways that I didn’t even begin to truly get until after she died.

This is one of those ways—sharing her love of those cookbooks and Southern Living recipes with her daughters.

And the timing really couldn’t have been better, either. I needed a line of connection to her… I needed some sign that she hadn’t completely gone. I needed to know that even though her body is gone from this earth—I still have a Mama.

What’s even more beautiful is that after I posted the message on Facebook yesterday, I could feel my whole being wrapped in love and prayer and peace.

I calmed down. The tears subsided.

I slept hard last night—one of the most restful sleeps I’ve had in a while.

This morning, I woke up with a profound sense of gratefulness… a depth of which I wasn’t aware could exist. I am grateful for this life. For all that I have experienced, for all of those who have thought good things for me, said prayers for me, been there for me… grateful for David, grateful for my family, grateful for everything. 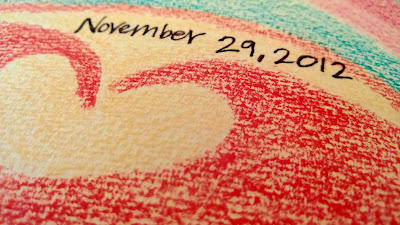 So, I’m here—and I’ve thought about updating my blog with something besides grief talk, but today, this is where I am, so this is what you get.

Since I lost my mom suddenly only about four months ago, I often want to speak up when I see or hear someone struggling with their parental relationships. Especially if that relationship is between a mother and a daughter.

I am lucky, because my mom and I resolved our biggest issue (which all boils down to pride, really) a few years before she died.

Many don’t get that chance.

But I feel this strange compulsion that I’m having to fight back—it’s one where I want to approach whichever party is doing the talking, about how frustrating or hurtful or sad the relationship is, and I want to say things like…


And then I quickly get myself in check, before I make a total ass out of myself.

I wasn’t expecting to have this kind of compulsion. I guess it’s a save-the-world mentality, or maybe it’s because I would do anything to have my mom back, and it feels childish and stupid to see other people mistreat the ones they love so much, and I bet they wouldn’t take those people for granted if they suddenly died, so why can’t they stop taking them for granted right now?

I put myself on guilt trips for not calling my dad every day anymore. For about the first month or six weeks or however long it was, we spoke daily, whether I called him or he called me. We both needed that—somehow it was easier to check on each other than it was to check on ourselves.

But that immediate emergency time is gone, and now no one is offering condolences because it’s old news (to everyone but me, my sister, and my dad) and we’re all just supposed to move on with our lives.

But there’s no “right” way to do grief, and for me to judge myself or anyone else is a waste of time and energy. And I know that, but I still do it (until I realize I’m doing it, and then I stop myself).

I read an article recently that talks about emerging research showing that cells from children stay in the mother’s brain for the remainder of the mother’s life. (It’s here, if you’re interested.)

What that means is that a part of me quite literally died when she died.

The thought of that is unbearable…

I want to fix it all. I want the pain to go away, I want to stop missing her, I want to have just one more conversation with her. I want to hear her voice, smell her, see her hands… something—anything—to connect with her again.

And it just won’t happen. There’s not a thing I can do about it, except try to fix all the other people around me with broken relationships, and that doesn’t work either because you can’t fix anyone and it’s not only pointless to try… it’s downright arrogant.

Everyone is on their own path, and for me to attempt to intervene or judge is wasted energy—not to mention, people don’t like it when you try to fix them.

So because I can’t do that (nor would I try, in any other place other than the inside of my head), I have to deal with my own emotions, my own life, my own stuff.

It’s just a weird time. Some days are better than others. Sometimes, I break down into tears because of something I would really like to ask my mom. Sometimes, the reality hits me all over again, and there I am standing at the hospital with the chaplain, my dad, and David.

I am at least going to work every day and I am mostly a productive member of society. Whole days go by when I don't cry. And even though I am grieving, I can also laugh and feel joy, and I most definitely appreciate where I am and what and who I have.

On the flip side... I am behind on a very long list of “to-do” items, not the least of which are thank you notes for all of the amazing things that people did for my family when my mom first died.

When I think about that… I immediately feel overwhelmed. Writing thank you notes means addressing that that time has passed. It means it’s real. It means the initial shock has worn off, and I am accepting this new reality.

And because I can’t seem to do anything half-ass, I am not one who would write a non-specific note for one of the most deeply edifyingly excruciating experiences of my life.

So, no, I haven’t yet written any thank you notes.

But if you think, for even one iota of a second, that I am not grateful… you’re wrong.

I am grateful. And what's strange is how the depth of my gratitude has grown over the last four months.

This life is precious. As far as I know, it's the only one we get.

Even though I feel sad in this moment, I am still doing and feeling everything possible to life my life wholeheartedly.

Some days, that's a little messy.

Today is one of those days.